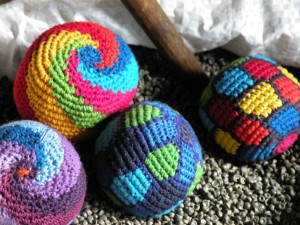 My name is Antonio. I am 24, I was born in 1981 at the time of the worse crisis in Guatemala. I was about 1 year old when Rios Montt became president, and he was the one that created the civil war and had many people massacred in different parts of the country. When I was born, my father had just graduated as a teacher and he knew that it was very dangerous to work in the west, where I’m from. Since the young teachers were sent to faraway places and there was fear of losing your life, my father decided that we should go to Huehuetenango when I was about one year old, while we waited to see if the situation got better or worse. We knew that Huehuetenango was a little less dangerous than other places towards the north of the Department. I was about 3 and one of my uncles, my mother’s brother, had also just finished his teaching degree and was working in a community in the Ixcan . He had just started to work there and he was going from the capital to his job and disappeared.

We don’t know how, or when, and I think that left a mark forever, mainly on my grandmother, his mother. They were looking for him for a long time, but there are no record of what happened to him. At that time, transportation was very limited, and my uncle had to walk for a couple of days to get to his job, he would stay there for a long time, a month, 2 months, and he would come for a week or two. One of those times was when he disappeared. My mother tells me that during his last trip, he came to see my mother to visit, and that was the last time they heard from him. They don’t know anything else. That’s what I could say about what my family, mostly on my mother’s side, suffered with my uncle’s  disappearance. Just that.

Have you told other people about these experiences? 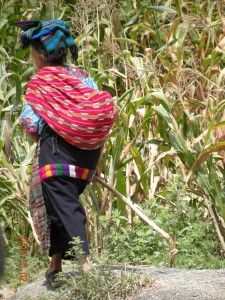 I think it’s important because I didn’t tell my mother what I saw (a young mother and her baby shot by soldiers). And during those years, 6 or 7, I was always afraid, frightened. I grew up very different than my brothers. I could see that they were different than me because they hadn’t seen what I saw. Then, after I talked to my mother, I felt much better and I feel that talking to people about what one experiences is very important because it’s a way to vent your feelings. It’s a way of saying that another person feels what I felt, not just me, and it makes you feel understood. And yes, I think it’s very important to talk about what happened, that people know what others have suffered, because many people don’t know about it and many have suffered even more than us.

I think it’s important to talk about it, mainly with young people because the ones that are 14, 15, 16, they know that there was a difficult time for the country, but very superficially. They don’t try to find out whether their families were involved or not. In my case, I know that what happened with my family was painful, but, as our classmate was saying, they suffer even more in other places. I remember my father telling me that there were times when the Army would get to the houses and they would take anybody in the house that had books from their “red list” of books. When my father was studying he had good books, works of literature that he used while studying. But my grandfather got scared and burned them. Maybe for lack of knowledge since my grandpa didn’t know how to read, but also because he was afraid that the Army would accuse him of being involved in something which he didn’t even know about. I realize that sometimes when I go to my town, the young people now are very different, they have other ideas, and don’t know what happened. I think it’s good that they know the history so when they are electing Representatives, they choose them well so that they know how to work for the whole country, and to avoid a repeat of what happened. 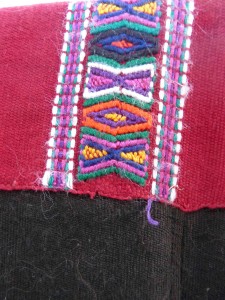 My name is Ana. I really didn’t suffer anything during the civil war, but my parents did. My mother tells me that when she was young, she was 18 then, they were always afraid and I think they still feel it, because she told me that even seeing the Army made them afraid. What they did to the young women then was to rape them, so my mother would hide so that she wasn’t raped. At that time, my father had just graduated and he was working at a school. He had to hide because they had the list of teachers, parents, and everybody who knew how to read and write. And so my father went to the mountains to hide from the Army. My grandfather did, too. Even if I didn’t live through it, just by knowing so many stories, I feel hurt.

And so I wonder why these things happened since we are not animals. And I wonder why those problems still happen when supposedly there is now the Peace Agreement. I think that’s why it’s good to have these talks, that the people who suffered talk to the younger ones so that they can understand because the younger ones are not aware of what happened. Many young people do not think about what they do. And I think that us, the indigenous, have to get ahead, look for other opportunities, and going to university is one of the ways, but very few have access to it. The younger ones have to be pushed to go forward, especially the indigenous.

I have another question. Sometimes people feel that talking about difficult and painful things is too hard and not a good thing to do. And sometimes people feel that talking together in a group where other people understand your experience makes you feel less alone.  Do you think that it will be helpful if the program offered an opportunity to talk together about your experiences?

In my case, for instance, I don’t think it’s so much help in sharing with others, but helping us look further, to have ambition for something better for us, for our culture. We don’t talk much about this in the program, like the others classmates pointed out, unless you make good friends with someone to share these things. I didn’t want to talk about it for some time. I wanted to forget, to have a new life, but there are moments in which I needed to talk, to share with someone else and feel that I wasn’t alone.