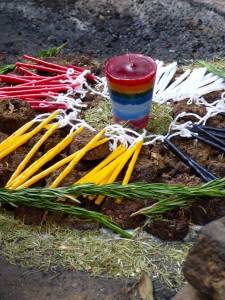 After reading the book, my first impression or my first feeling is the importance of keeping the memory and to rescue the memory. Because with the civil war, we lost, we lost our process, we lost our life. But basically, we lost our opportunity to talk and to say what is going on in our life, what we were feeling because of  the civil war, because  of oppression, because of repression. And I think we didn’t have the time to reflect and to think where are we going, you know.

Because people were so busy trying to survive?

Exactly. So with this opportunity to talk and to remember, because this is the importance of  memory, to remember that we were living… I mean, we were living in this time, you know, and we have to remember what we felt, you know, we cannot continue in the life forgetting or losing this part of our memory. So, I say it is important to keep the memory. Not just for the next generation, but for all the world, for us, for our dignity, for our existence. We have to remember where we were, what we were feeling. So it is important for us, and then, in my opinion, we can do something with the memory of the people who died during the civil war. But we need to recognize ourselves first.

What about the people who say that the memories and remembering the history are too painful?

I agree, and I think that it is so painful, but I think it’s better to live seeing and touching this pain, because after you can talk, you feel better about yourself, I mean, it’s part of your life and you need to talk about this .The first time or the first times can be very painful, but then I think it can get easier. And the pain is part of our life and it’s the most hard part of our life and sometimes we cannot see it, you know, we don’t want to see it, we don’t want to recognize it in our life; we just want to go on, walking straight, and not turn around to see ourselves with our pain, with our bad feelings. But there are good things, too. So, I think it’s necessary.

The reality is that even if you don’t talk about it, it doesn’t mean that you don’t feel pain.

Exactly. Well, my Mom talks sometimes, you know. This morning she was remembering some parts of our suffering in our life then. And she talks about things, but just for a little bit. I mean, some nights she wakes up and starts to talk about my sister who “disappeared” or sometimes about my father who was murdered. And then she stops and sleeps. I mean, you just have to listen to her, you know. And it’s just s little bit. But I can see that it’s different now from five years ago, or ten years ago.

She’s talking more now. Maybe just five minutes, or one minute, and maybe just to remember something, like “Oh, this food was your sister’s favorite food” and “I remember one time”, like that…

And maybe if you start to ask her, or something like that, she’s like… she’ll stop talking, you know. And my feeling about this book is… one is that I thought that I have all the perspective of the painful parts of the human history, but when I read the book, I say no, this is more than I was thinking, you know. I feel closer to the people (who told their stories) and I feel that it’s a history of all of us, you know. I feel that I can share more, maybe through the book I could understand the people and share with them, you know, that I’m with them and they are with me. Even though maybe we never talk about this, never.

In my testimonio I said that we lost things and maybe will never recover, you know, but now I can think that we are building again together, you know, it’s the opportunity to building again and to say yes, we had this situation, we lost many things, but we are living now, we are alive and we are rebuilding, too. I think it’s necessary to continue and to look to the future and to see what we want as an individual, as a Maya movement, as, you know, as a struggle, the Mayan struggle. We have to see the past and to talk about the past. And I think that’s what’s most important about this book. And I think it’s the first book to talk about young people’s experiences, not political. This does not mean that young people don’t have political positions, but I think we are talking about our experiences when we were very young or little boys or little girls, you know, little people. So, I think this is the most important, to give a voice to us to say what we were feeling during that time. Not now, that time.

That’s exactly what you said to me, and I remember the moment…It was way before I’d even written the book. You said, “thank you for bringing the story of young Maya people out into the world”. And I remember standing there with you, thinking,  “I can’t do that, that’s too hard, I don’t know how to do that”. And with your help and with the help of all of the other people giving their testimonies, we were able to do it.

You articulated that very early on, way before I knew what we were doing. And that catapulted me forward into making it happen. What I hope will happen with the book is that we find a way to get it into the school system, so that other young people will learn about and be able to understand what the real history is. You said before that the book is simple, it’s written in simple language; that’s because that’s the way people told it, it’s not theoretical. These are the voices of the people who lived the experience.

I agree. My Mayan guides told me that the pain can purify you, and he said that our life is like hilo,(thread) and sometimes we have to wind and unwind it.

And some parts of our life are not too good, are not too happy, you know, but when we take the pain, I feel that we can do this, we can purify our soul. And then I can remember more clearly the other people who cannot talk anymore because they died. And the history is in Cual Guerra?, many people talk about friends, about parents, about brothers, about fathers, about sisters.

Do you think it’s possible to get the book embedded into the educational system so that more people would read it? And what do you think would be the best way to distribute it?

I think it’s difficult but it can be a goal,  because, for example, in the Peace Accords one of the commitments was that the Truth Commission Reports be distributed through the official educational system.

And has that happened?

No. No. And it’s a commitment of the government, you know, because the UN said that it’s necessary for the new generation to know what happened in Guatemala and, actually, the first recommendation was from the REMHI, the book from Archbishop Gerardi, Guatemala, Never Again! The UN said that is necessary to share, to talk about this. It hasn’t happened because this official system is not interested. One side is not interested in talking about this; the other side is interested in hiding, you know.

So, even though there is the mandate that this information be disseminated, it hasn’t happened. So, do you think that Cual Guerra? would fall into the same category, that the government would not want the book distribute?

We can try it. Editorial Cholsamaj probably has contacts with the Cultural Ministry, and maybe they would talk with the Educational Ministry, and we can see. And maybe it could be distributed through the Rigoberta Menchú Foundation, for example. Or the Presidential Commission against Racism.

And, you know Ricardo Falla? He is a priest, who was with the CPR (Communities of Population in Resistance) during the civil war and, actually, he has started to write about young people. Because he said that the last time we had the histories about the civil war it was just about adults, but what happened with the kids? And last year he made a presentation about young people.

The book is about how they are living now. Young people in Mayan communities where the civil war was very hard, for example, in Ixcán or Quiché. What’s going on with them, you know. So, he was thinking about a strategy to share and to send the books to more young people…

I think Cual Guerra? tells it’s such an important part of history that you all had the courage to speak about. It’s so important to get it out and have people read it. So that’s the next step.