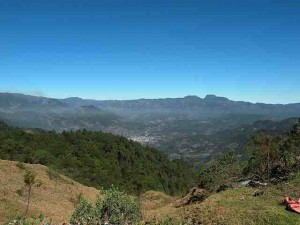 Hector:
I’m not very old. I’m 19, but I lived the war directly. The war is not very much heard of in San Marcos because its impact was mostly in places like Huehuetenango and Quiche. But it happened there. My father was a teacher at a town in San Marcos, in the municipality of Comitancillo and we were with him, of course. But this town was very attacked by the Army. They would come and take the rural school, the elementary school and they stayed there and controlled the whole community. Nobody could leave their houses and if they didn’t have food or water, that was their problem. You had to stay in your house because we knew that the guerrilla would go by and our families had to provide them with food, tamales and whatever they needed. So, they (the Army) found out about it and that’s why they took control of the town. And precisely in 1992, both groups got together in the same place, in the same town, and there was a conflict in the center of town and it lasted 3 days and a half, day and night, and we could only take our corn crop, put it together, and we got under the beds. The corn was just to prevent the bullets from going through because our houses had very thin walls. What really had an impact on me at that moment was that my father took out the propane tank that we had because he knew that if there was a bullet it could cause an explosion. He took the tank and went out running in the middle of the shooting to throw it far away. At that moment, we could only wait for him to be shot. Thank God it didn’t happen. We had only water for 3 days because we didn’t have enough food.

This is not that my parents have told me, it is something I remember, so it is my own experience. Some of my uncles were injured, but nobody in my family was killed, but others that we knew were killed and many disappeared. There were people from our own town that would tell the Army who they thought was helping the guerrilla and they would disappear and we wouldn’t hear about them again.

What I saw is what I just told you. The bombs were exploding near the house because we could hear it. Some of them injured some people badly. My parents were not killed. My father took part in several protests in the capital. He studied at San Carlos University and it was very damaged by the Army, so that was a constant fear we had. He fought in favor of the university.

Has this affected me or my family? Of course. I still suffer from insomnia, I can’t sleep well. It’s had a psychological impact because we were constantly expecting the Army attacks which happened several times at night, so there was constant activity at night that wouldn’t let us sleep well, and even now I can’t sleep well.

I’m studying Law at the university and what happened influenced me to study this, because I know that the politics, the laws were the cause of the conflict. The law was unfair, it still is now, but then it was even worse. The politicians used their power to repress the town and control the whole country. That was what motivated me to choose a career that was related to society. My society, the one in which I live, and the people who have many sequelae from the war as we can see now in the violence that happens in our cities, mainly in the capital which is where many people join maras (gangs). That delinquency was caused because of the violence that the people suffered because many of the young people that live in the maras actually are orphans from the war.

I can tell this story and I hope that it will help other people to understand. The constant fear has affected us directly, but indirectly too, since there wasn’t a lot of commerce between the towns because it was very dangerous to go from one town to another since the Army was on the road and they would take people or torture them. It was really hard because several of my neighbors were tortured or mutilated.

When I have children, because I don’t have them yet, I will tell them the history of how things happened because they will be the ones, when we die, that will continue in this country and it depends on them that this country changes. So, if they have a knowledge of what happened in our country, they’ll have a social conscience to change that history, to prevent it from happening again and to put an end to the sequelae. And mostly, in regards to the children that my friends have or that I’ll have someday, the main thing is to educate them without violence because when a parent is violent with their kids, he’s teaching them about violence and placing the seeds for violence again in them. This is all I have to say. Thanks for this time.