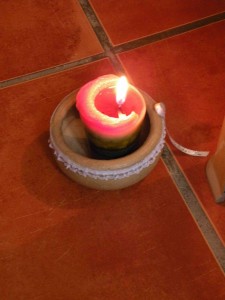 My name is K’in. In regards to what happened to my family during the war in Guatemala, what I remember, or better said, what my mother tells me, is that I was just a few weeks old when my whole family had to leave Santa Cruz del Quiche for the capital because my father was a health provider in the town where they lived and he was very involved with religious activities, which had them in the “black list” that the army had. My father and my 3 older siblings were on the list. My mother wasn’t, but they decided that we all went to the capital for security reasons.

Then, from that time, around 1980, 1981, we were in the capital. My father had to start working selling fruits, vegetables, and things like that. He had to do business and my older brothers also helped him, while my mother stayed home with us, the younger ones, and took care of house chores. We hadn’t been in the capital very long, when my grandparents, on my father’s side, and a cousin, were massacred in Santa Cruz. A few months later, they kidnapped my father, he disappeared, and, to this date, we don’t know anything about him, whether or not he died.

After this, my older siblings had no other option but to join the guerrilla. Three of them joined it, and one of them had to go to Mexico for exile. The 4 younger ones stayed with my mother. One of my sisters that had join the guerrilla got pregnant and had to come back to the capital with us. She was doing my father’s job. From one place to the other, we were never very long at one place, one week in one place, a few days in another one, etc., until we decided to reside permanently in the capital, for the same security reasons because my mother heard constant news that the army wanted to killed the whole family.

After many years, when the peace was signed, I met my older siblings. I only got to know them recently. They came back to a “normal” life, so to say, and I think that that may be the reason that we don’t have a close family relationship. Each one  is doing their own thing.

However, we all know we have to continue fighting for justice for the family and the community since it was the job my father started in Santa Cruz del Quiche. That’s all I have to say.