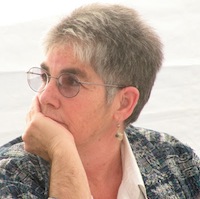 I am a retired clinical social worker and a writer living in Vermont.

I went to Guatemala in 2004 as a volunteer teacher with the Maya Educational Foundation English Language Program. During those first days, one of the students introduced himself as a survivor of the Guatemalan civil war; I realized that I had more to learn than to teach, and so I began to listen… During several trips back to Guatemala with the Guatemala Solidarity Project and independently, I collected testimonies from university students, their families, and other survivors. These testimonies have been published in my book What War? Testimonies of Maya Survivors ( Full Circle Press, 2009, Wipf and Stock Publishers, 2011).

“A middle-aged American stranger who knew little Spanish came to teach English and, somehow, encouraged young Mayan university students to share their pain-filled memories with her and with each other. This book records that extraordinary achievement.”

My book about the Spanish Civil War Love and Revolutionary Greetings was published in February,  2012 by Wipf and Stock Publishers.

Love and Revolutionary Greetings: An Ohio Boy in the Spanish Civl War is the story of Sam Levinger, a young man who went to Spain in 1937 to join the fight against fascism. His story is placed in the historical context of the 1930’s, when freedom everywhere was threatened by Franco, Hitler and Mussolini.

The book is based on Sam Levinger’s letters, poems, and stories that he sent home from Spain, interspersed with those of his mother, Elma Levinger. Over 40,000 men and women from all over the world formed the International Brigade. 2,800 men and women were from the United States; they became the Abraham Lincoln Brigade. Sam Levinger was one of them. The book is the story of a dedicated idealist and offers an eye witness account of the hardships and politics of the times. Love and Revolutionary Greetings tells the emotional and political story of American involvement in the Spanish Civil War in the language of people who lived it.

“The story of the 2,800 Americans who defended the Spanish Republic against fascism in the 1930’s has sparked many compelling accounts, but few as moving as this one. Laurie Levinger has unearthed a cache of stunningly powerful testimony, most of which has never been published, and carefully crafted a beautiful, multi-voiced tapestry that takes us from the depression years in Columbus, Ohio to the Spanish trenches. Present throughout this wonderful book is the charming, intelligent voice of her uncle, Samuel Levinger, a budding writer of great talent and committed young Socialist who put his life on the line to defend his ideas, and paid the ultimate price. A must-read for anyone interested in the Spanish Civil War or the history of the American Left.”

Find out where to purchase my books.